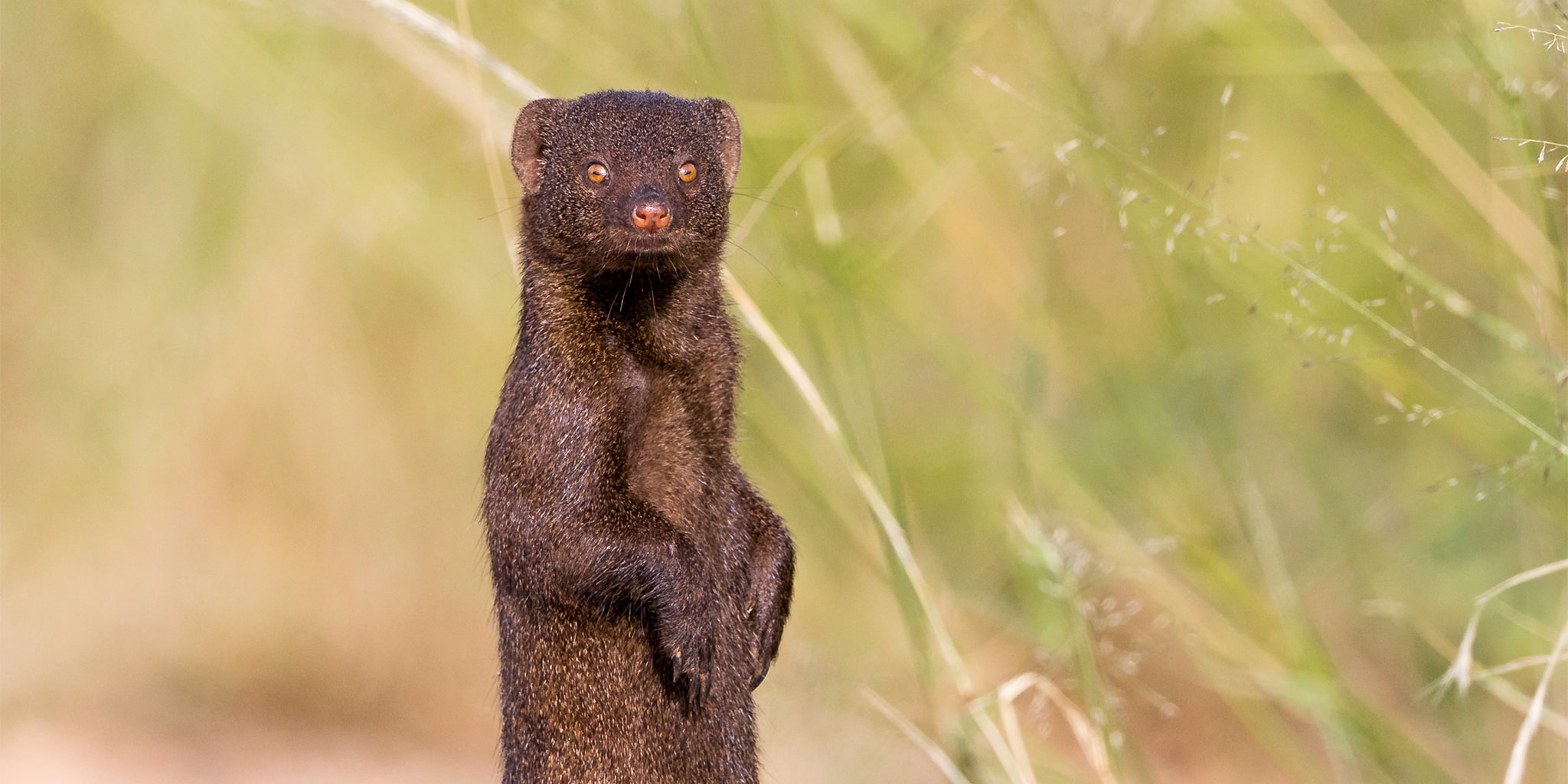 Behind the Shot: Standing Mongoose

Welcome to a new section of my blog called Behind the Shot, where I choose one of my favourite photos and ramble on about how it came to exist. Enjoy!

Check out this furry little T-Rex! Okay, it’s actually a mongoose that I had the pleasure of meeting in Kruger National Park, South Africa. They stand on their back legs like this to check for any nearby danger (and it’s adorable).

After a rather uneventful morning drive, I decided to head back out during the middle of the day to get to know the area a bit better. I wasn’t particularly expecting to come back with any nice photos, but as I had only been in the park for a few days everything was new and exciting.

As I came around a corner, a small brown blur dashed off the road and into the long grass. Yes! Action! I pulled up on the opposite side of the road, killed the engine and waited. Just as the blur poked its head back out of the grass, a car came screaming past in the opposite direction and scared it off. Apparently the driver had no interest in blurs.

Never mind, I thought, as I started my wait all over again. After a couple more minutes I saw a blurry nose poke out onto the road. Then a blurry paw. Then another car coming in the opposite direction. Great. Luckily the driver of this car was a fellow blur enthusiast, who slowed down and stopped to try his luck as well. We nodded at each other, silently agreeing that we were now in this together. We were a team.

Then the blur carefully stepped out onto the road and un-blurred itself to reveal this wonderful little mongoose. It started trotting in my direction – as close to trotting as a mongoose can – and stopped occasionally to throw a glance over its shoulder. It lifted itself up onto its back legs just long enough for me to snap a picture and then disappeared into the grass once and for all. The other driver and I started our engines and passed each other with a final nod before both quitting the team we had only just formed. We didn’t even have a chance to get matching t-shirts made.

Sunrise and sunset light (golden hour) is best for wildlife photography, there’s no denying that, but that doesn’t mean you should completely write off the rest of the day. This encounter happened when the sun was close to being at its highest – just look at the shadows underneath the mongoose – but this photo still turned out lovely in my completely unbiased opinion.

As soon as the mongoose stood up I instinctively rotated my camera and took this photo in portrait orientation. I tend to let the animal or scene dictate which orientation to shoot it in. I had my camera set to Aperture Priority, with my aperture set wide open at f5.6 (the widest setting for my 500mm + 1.4x converter).

The camera chose a shutter speed of 1/1250s and an ISO of 320. If I was shooting this manually I would have chosen a slower shutter speed and dropped the ISO as there wasn’t really a need for such a fast shutter, but then I would have missed the brief moment where the mongoose stood up whilst I fiddled with camera settings. This shot is the result of reacting to a situation quickly with zero preparation, which in my opinion is just as important a skill as being able to plan, prepare for and execute a specific shot.

So there you go! Dinosaurs still roam this planet. They’re just small, furry and go by a different name now.

Behind the Shot: African Elephant