Photographically-speaking, there’s nothing more frustrating than an encounter with an animal which is obscured by foliage. This was one of those times.

The late afternoon light was golden and glorious but the rhino had its head down, merrily grazing away on the other side of a thick line of bushes. Usually in these situations I just put the camera down and enjoy the moment, but instead I scouted along the bushes for an opening. I managed to find one and about 10 minutes later the rhino passed it, allowing me to capture this image.

I think it’s quite poignant that this rhino’s horn is framed in gold. By some estimates, a rhino’s horn is worth as much as double its weight in gold on the black market, and over 1,000 rhinos are killed each year because of it. So it’s always a privilege to see rhino horns where they belong: on living rhinos.

Please note:
– Approx. 15mm white border around the image, included in the print size
– Frame not included (this is just a digital mockup of what it would look like)
– Dispatched within 3-5 business days 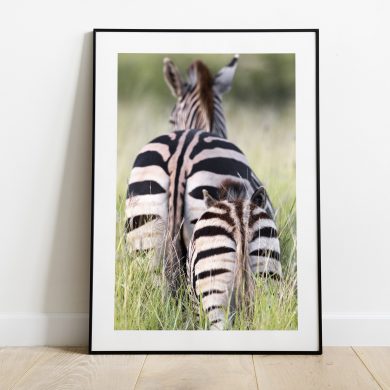